The service of Light at the shrine of St John Ogilvie

Archbishop Conti presided and the music was led by the St. Mungo Singers.

The celebration began with a procession which paused for the lighting of candles at the beautiful shrine of St. John Ogilvie, to the accompaniment of Geoffrey Shaw’s setting of “Hail Gladdening Light”. The congregation then joined in the singing of the well known hymn “On the Battlefields of Scotland” as the procession moved to the sanctuary.

The psalms for the Evening Prayer were Psalms 114 and 115, and the familiar settings by Noel Donnelly with the antiphons for a martyr were used. The canticle was that from the Apocalypse “Worthy are you, Lord” and it was sung to a setting by Fr. Gerry Fitzpatrick, with the response for the occasion: ‘Whoever denies himself for my sake will receive eternal life.’ 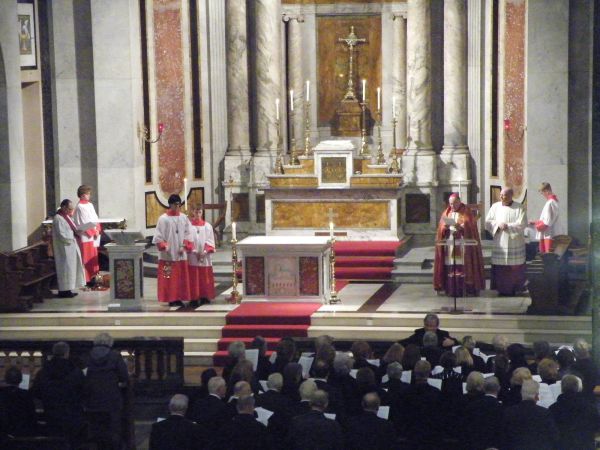 In his reflection, Archbishop Conti addressed the question of why we continue to remember John Ogilvie over 400 years after his birth. In these ecumenical times, would it not be more appropriate to “let sleeping dogs lie”? After touching on the salient points of St. John Ogilvie’s life and death, he answered this question by pointing to the example he gave of fidelity to Christ. He suggested that for today’s Christians in Scotland, the hardships may be of a different order but none of us can expect to go through life without some challenges or suffering. In the maturity of today’s ecumenical movement, we can recognise each other as brothers and sisters in Christ and share our history, and John Ogilvie can be held up as an inspiration to all of Christ’s disciples.

The service continued with the Morar setting of the Magnificat, intercessions which remembered all who had been martyred because of loyalty to their own faith especially in the troubled times which Scotland endured in the 16th-17th centuries.

Those who remembered it were able to join in the singing of the plainsong Salve Regina, before finishing with the new John Ogilvie hymn written by James Quinn S.J and set to music by Noel S. Donnelly. Some 50 of the St Mungo Singers were able to be present on this occasion – and they added in a ‘Taize’ Gloria after the final hymn – just for joy!

The congregation then enjoyed the hospitality of the Jesuit community in the church hall.