The Music Committee of the Archdiocese held a well attended workshop for Lenten Vespers at St. Mary’s, Calton on 31 March. The evening began with a sung Vespers, presided over by Mgr. Peter Smith, to give those present who might not have experienced this form of liturgy a taste of it before the teaching and discussions. 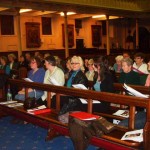 Some of the workshop participants

The opening hymn, appropriately for Lent, was the Bach “O Sacred Head”, followed by Ps. 26 and Ps. 88, and the Canticle from the Apocalypse. The short scripture reading was from the Letter of St. James, the Responsory “Guard me, Lord, as the apple of your eye” and the Magnificat was the “Amazing Grace” setting with the Lenten Antiphon “Unless the grain falls down and dies”. Continuing the Lenten theme, the response to the Intercessions was “Accepting death upon the cross” and the final hymn was “The Seven Last Words” by the late James Quinn. The service leaflet also gave participants suggestions for alternative psalms and hymns for use during Lent.

After the service. Fr. Gerry Fitzpatrick explained some of the history of Vespers and how it had come to be displaced during the 19th Century by other forms of popular devotions. He discussed with participants why this might have happened and how the celebration of Vespers could be recovered and made more accessible – when and how could it be introduced into parishes?

Fr. Gerry urged a practical approach, starting perhaps with one psalm and a canticle, and developing from there. Vespers could be introduced as a special service for feastdays or special liturgical seasons such as Lent. However, in introducing Vespers to a parish, the golden rule was to remember that the object of liturgy was worship of God, but it also was meant to help people pray.

The second part of the workshop looked briefly at some of the new texts of the Mass due to be introduced for Advent 2011. To give participants a first taste of what was coming, the workshop considered some of the music provided in the Missal, as well as the new Belmont Mass by Christopher Walker, Fr. Gerry’s new St. Andrew Sanctus and Memorial Acclamation, and Noel Donnelly’s new Dalreoch Memorial Acclamations.

In the best traditions of Glasgow workshops, the evening ended with refreshments in the church house and an opportunity to talk over the music and ask questions.

Lourdes Hospitalité 70th Anniversary: Vespers for the Vigil of the Birthday of Our Lady